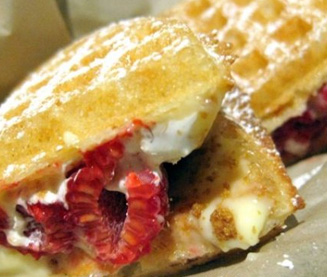 Put the raspberries in a small saucepan with the sugar, lime zest and 2 tablespoons of water. Simmer over low heat for about 3 minutes, stirring gently until the sugar has dissolved, taking care not the break the raspberries. Set aside but keep warm.

Heat the broiler to low. Put the waffles on the grill tray and grill for 30 seconds on each side or until golden brown. Remove tray but leave the broiler on.

Beat the egg whites in a small bowl using electric beaters until soft peaks form. Slowly add sugar 1 tbsp at a time, beating well after each addition, and scraping the sides of the bowl with a spatula between beatings. Continue beating until the meringue becomes thick and glossy (about 3 minutes).

Using a large spoon, spread the meringue evenly over each waffle, ensuring the entire surface is thickly covered. Gently Swirl the meringue into little peaks using the tip of the spoon.

Sit the waffles on the grill tray and grill for 3-5 mins or until the meringue peaks turn golden brown, careful not to burn.